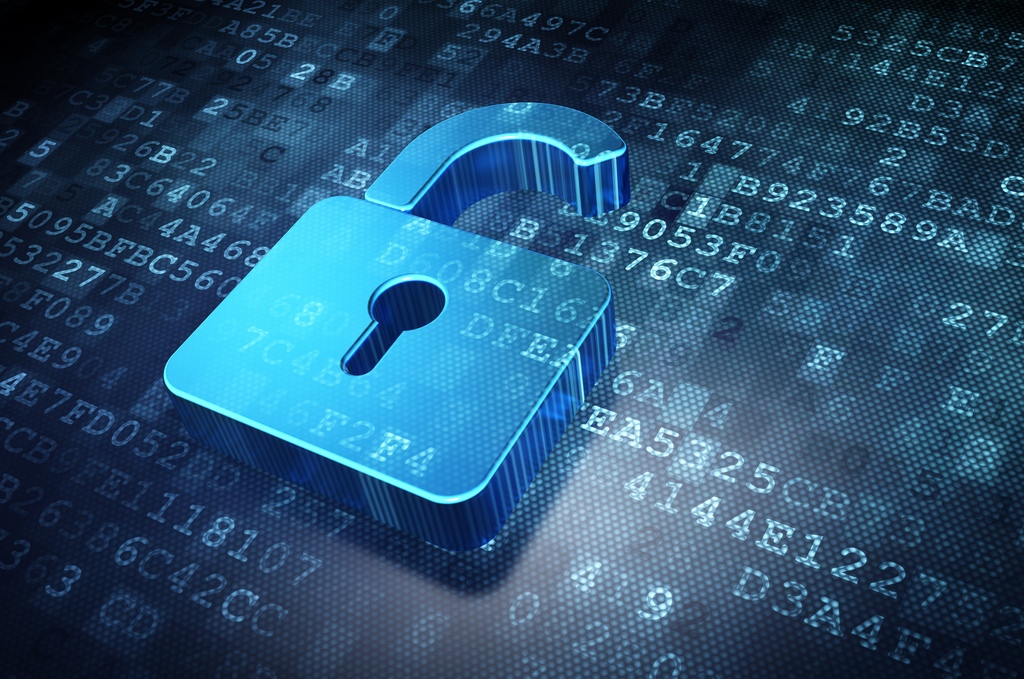 Dealing with documents in their physical forms is a big challenge for government offices. It requires time to create and verify them; consumes huge volumes of storage; and most importantly, needs significant human resources to manage. Digitizing the documents as well as the processes involving their storage and management not only results into the saving of paper, space and efforts but also builds digital assets, which can be leveraged by multiple government departments and functions. That’s exactly what DigiLocker is expected to do.

Similarly, from the citizens’ point of view, managing documents is a real task while dealing with government departments. DigiLocker intends to make the life of the common citizens easier too.

DigiLocker is the cloud storage facility that has been provided by the government of India to citizens for storing their documents online. Citizens can store scanned copies of their documents and access those anytime. They can also share the documents online with government offices to avail government services in a speedier manner. The ability to store documents in the cloud makes DigiLocker a solution conceptually similar to, say a Dropbox, but practically there’s more to it. It is designed to enable delivery of government services online. It is also a platform that can be used by various government departments to issue or verify documents related to citizens digitally.

Uploaded document: Citizens may upload scanned copies of their important documents including the driving license, voter’s ID card (EPIC), passport, marks sheets, income tax statements, etc. They can use the DigiLocker to submit a digitally signed copy to a government agency if required by that agency. However, the agency must be registered as a requester with the DigiLocker.

Issued documents: These are e-documents that have been issued on the DigiLocker by a registered issuer who pushes the Uniform Resource Indicator (URI) of the e-documents to the digilockers of citizens, based on their Aadhaar numbers. These are stored in a central repository, and citizens can see and share their respective URI links.

Various government agencies are registered with DigiLocker as issuers and they can issue e-documents to citizens. These agencies include CBSE, Registrar Office, Income Tax Department, and so on. In 2016, CBSE issued the class 12th result, while NEET issued the rank letter, on DigiLocker. Also, all the CBSE results now onwards would be issued on DigiLocker. DigiLocker also provides the facility for issuers to issue legacy data but that would require Aadhaar seeding in the issuers’ legacy databases.

A requester, in the context of DigiLocker, is a government department that offers citizen services (the revenue department, a passport office or a municipality) or an organization that requires documentation (banks, telcos, etc.). In order to provide a government service, a government agency needs to ascertain an individual’s identity, age or nationality, for which various standard and supporting documents issued by multiple government agencies may be required. In order to provide its services, the requester can request for digital versions of those documents and accept those online through the DigiLocker. 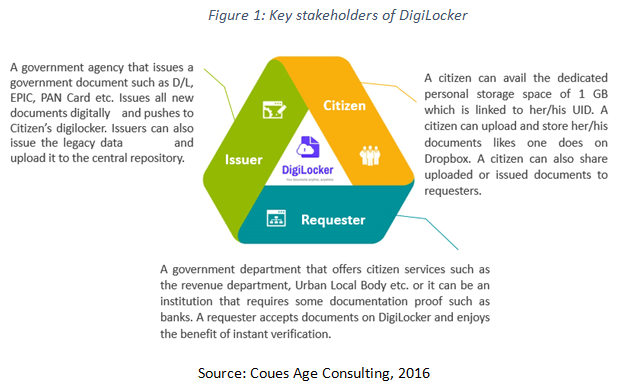 The DigiLocker is a digital platform that facilitates online processing of documents and thus enables speedier delivery of various government-to-citizen services.

Many departments that use a workflow environment might have integrated their internal processes, but when it comes to dealing with other government databases for verification of the applicant information, the process may still be done manually. DigiLocker facilitates inter-operability among various government databases while keeping the citizen at the center. All the issued documents lie in a central repository and can be accessed by a government department to which the citizen initiates an access.

The Process-Verification matrix provides four scenarios, of which the ‘Digital Process, Digital Verification’ quadrant is expected to see growth in future. The real value of DigiLocker would be unlocked once that happens. 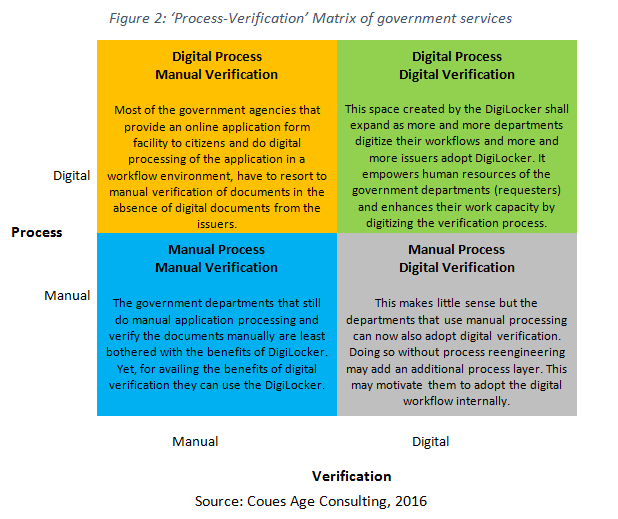 Benefits for the stakeholders

The benefits of DigiLocker are many for all the stakeholders. The citizen gets a dedicated and secure personal storage space which in itself is a great utility. The datacenters of DigiLocker are in India and hence subject to Indian jurisdiction and in case of breach of terms and conditions, a citizen may seek a judicial remedy. 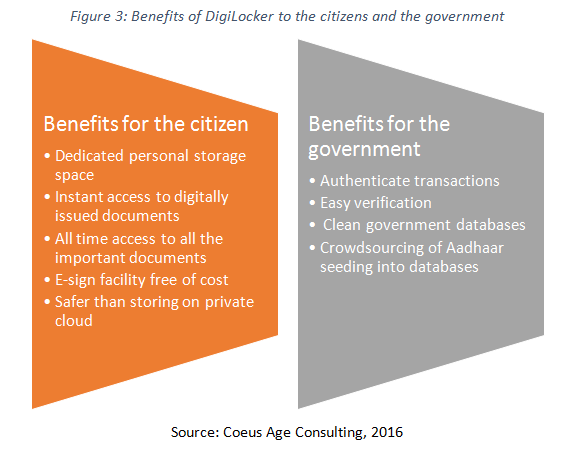 The government also benefits, most importantly from the ability to deliver e-governance services to citizens in a timely manner.

An issuer gets the benefit that no citizen can forge documents and indulge in malpractices in its name. The benefit to the requester organization is that it becomes easy to test the authenticity of the supporting documents that a citizen provides and the decision making is done only on the basis of authentic documents. For example, it rules out the possibility of students using hi-tech tools to forge mark sheets and seek admissions for a university course where they were otherwise ineligible. Such malpractices can be curbed by using DigiLocker since it makes it easy for the university to verify the authenticity of the documents instantly.

On a broader level, it leads the Government of India toward clean databases. The Indian government exchequer suffers huge losses when non-eligible citizens claim social benefits by producing forged documents. They enroll as beneficiaries of various government schemes such as subsidized LPG cylinders for households, subsidized food grains, and social benefits for families living below poverty line (BPL) or economically weaker sections (EWS). All such malpractices could be eliminated with the use of DigiLocker.

DigiLocker capitalizes on the Aadhaar number and the mobile number. In order to avail the services of DigiLocker, a citizen must use both the numbers, synced with the Aadhaar database. Aadhaar, being the unique identifier for each citizen, has been selected as the digital locker number while the mobile number helps establish a connection with the citizen through a one-time password (OTP). The combination makes it a unique one and also adds an element of security.

DigiLocker involves the citizen participation in Aadhaar seeding of the government databases. For issuing the marks sheets of students, the CBSE and the students have contributed to clean the student database, which can further be used for other government benefits such as providing scholarships. This also exemplifies how each of the parties, the individuals and the institutions, are benefited while simultaneously contributing their bits toward the bigger goal of having clean government databases. That’s the power of crowd-sourcing. 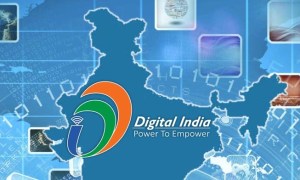