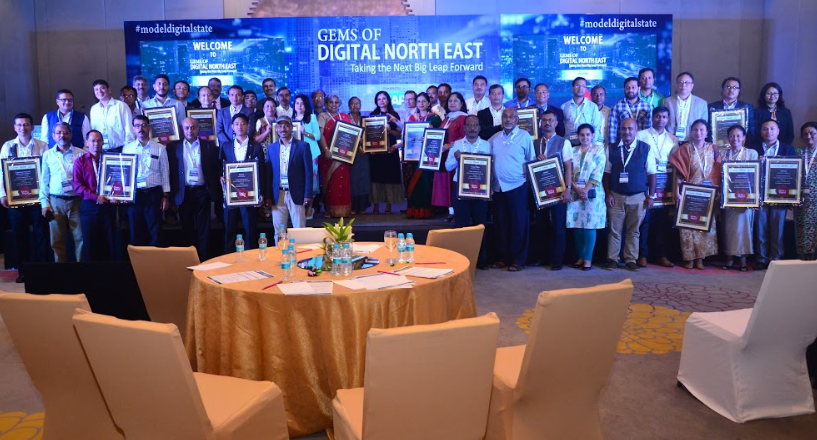 The Gems of Digital North East – Powered by SAP was no ordinary event. It was a lot of learning, sharing and celebrations, indeed a day well spent for all present from the government and the industry.

Rarely do 60 senior government and industry officers come together in a hall to not only celebrate the best of digital initiatives in the North East Region, but also intensely debate upon the challenges ahead and build a consensus on the next leap forward.

That’s what happened on the 31st of October, 2018 at Vivanta by Taj in Guwahati.

The event had a great start in the form of an insightful keynote by Shri Vinod Seshan, IT Secretary and Director, DITEC, Government of Assam. Shri Seshan gave a vivid description of digital in multiple governance domains in Assam and emphasized upon making it simple for citizens, by converging thousands of services behind a single interface. That’s really a vision that puts governance just a click away from the citizens, directly or through the intermediaries. He stressed upon the need for building ‘trust’ of citizens in the government by building transparency, accountability and security in their digital interface. That’s the goal that those responsible for building digital systems must keep in mind.

Coeus Age presented an analyst’s point of view and defined the four aspects of DNA of a Model Digital State.

Shri Anupam Garg of SAP presented very interesting use cases of digital platforms that can help build the digital trust. He delved deeper into the domains of Comprehensive Financial Management System, Healthcare, Agriculture, and Food Distribution with a special emphasis on Dairy, as basic cornerstones of a Model Digital State.

A distinguished panel of 7 senior officers from multiple domains and states unanimously identified that building a seamlessly integrated platform for the citizens is the bigger goal, which would require issues such as standardization, interoperability, data protection and quality of bandwidth to be addressed on an urgent basis.

The Open Space approach, a unique method to openly discuss critical issues in a conducive environment, was used to engage all those present in the room. Each delegate present put her/ his point forth with respect to three questions –

1. What is the bigger problem to be solved?

(Four waves of IT were discussed in a state’s journey towards emerging as a Model Digital State – Basic, Client Server, Web Enabled and Data First Paradigm)

3. How to take the big leap forward?

There were almost unanimous answers to these questions.

The role of IT and digital is to build a government that is efficient, effective, inclusive, transparent and accountable. It must be capable of solving myriads of problems in the domains of health (how to provide affordable health to all), education (how to provide access to education for all), agriculture (how to build sustainable and self-sufficing food production) etc.

There was an interesting perspective that emerged in terms of waves of IT. A clear transition is taking place from wave 2 (client server) to wave 3 (web based). Coeus Age analysis suggests that further transition to wave 4 (data first paradigm) will be naturally faster.

Catalyzing the transition would mean a big leap forward for the North East Region. In short, the 8 states of the North East region are at the threshold of a big transformation.

The transformation would require a holistic approach including overhauling the core infrastructure (data centres, networks and most importantly internet bandwidth), core applications and building a hybrid environment management capability, as the transition will mean that legacy and new will exist together for some time before a full-fledged transformation takes place.

A book titled 29 Gems of Digital North East – Taking the Next Big Leap Forward was launched by the dignitaries present.

The ceremony ended on a very high note when 29 Shining Gems of Digital North East were felicitated with awards for exemplary work in their respective domains. 5 States (Assam, Manipur, Meghalaya, Sikkim and Tripura) were also presented with the Promising Digital State of India Award.

That’s how we spent a day that was high on learning, sharing and celebrations.